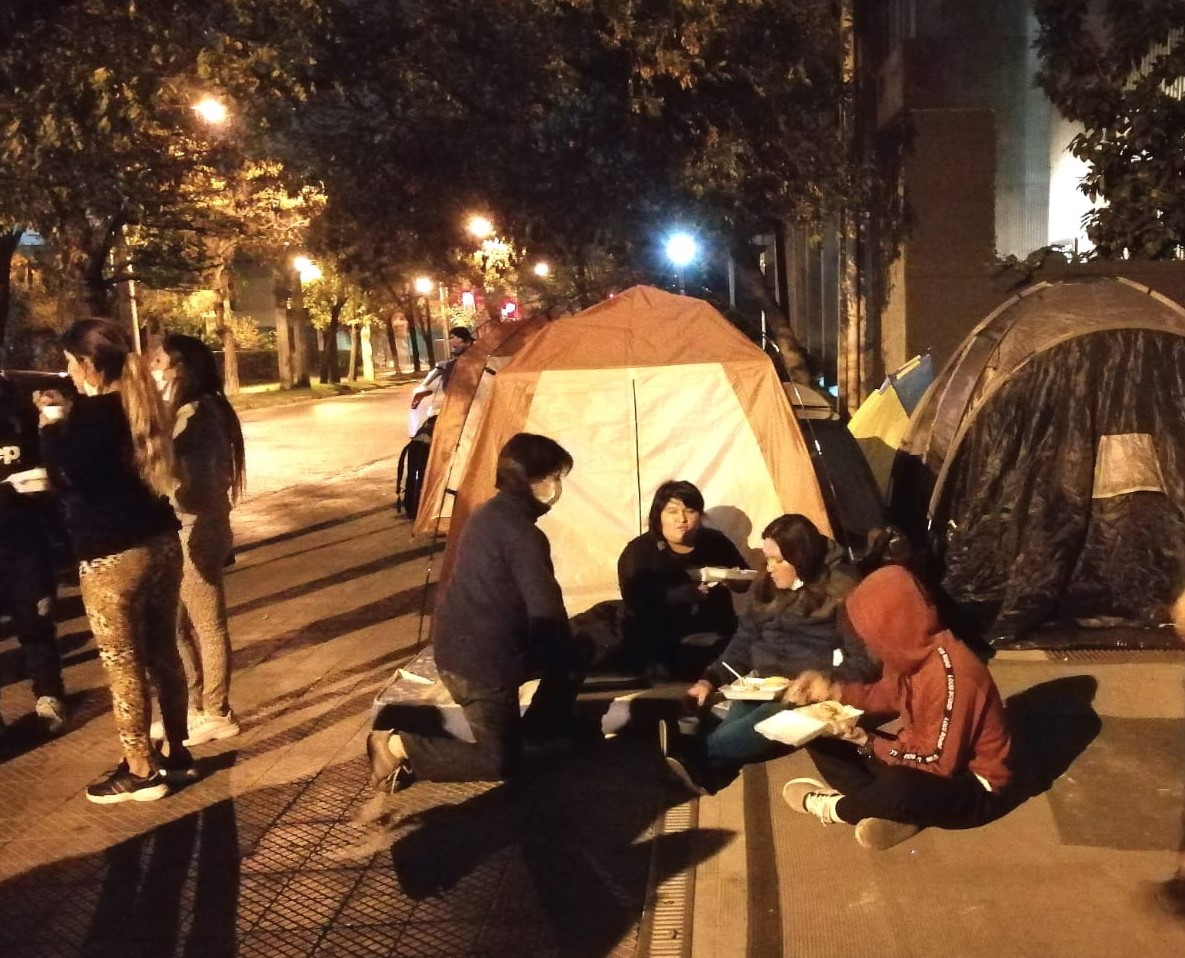 Posted at 10:58h in Migration news by ACI

At the end of April and the beginning of May in the midst of the coronavirus pandemic, around 300 Peruvians went to the Peruvian consulate in Santiago seeking repatriation. Families with small children, pregnant women who with the distress of being unemployed desperately wanted to return to their country. Some had been in Chile for a long time, years, and others only months. The majority of the latter had come to our country a few months ago as migrant workers in the fields harvesting fruit according to the season. They earn a bit of money and then return to their country. That is how many of them wound up stranded in the midst of the COVID-19 health crisis.

In those days in the afternoon the temperature became noticeably colder. Some of the more fortunate families settled in with mattresses and could set up tents to protect themselves from the cold. Others, the majority, passed the cold nights in the open on top of cardboard. Despite the crisis many people would reach out daily to share 4 meals a day with them. We, who have our community only a few blocks away, could go every morning and then at night to bring them thermoses with hot water to ward off the cold. Around 70 people would come to us each day to use the bathroom facilities and some days the showers. Some afternoons they invited us to participate in their meetings with the leaders who gave a detailed report each night on the progress made in the conversations with the consul. At last,  after about 15 days there was “white smoke”. After several negotiations and conversations with different authorities, they managed to be transferred to a hotel so that they could do the 14 days quarantine and afterwards be transported in a humanitarian flight to Lima. During those days, we were able to welcome and accompany them through listening. More than anything it was being present, listening to them, their stories, their longings and at the same time to what each one shared about him/herself.  While they were waiting for their turn for the bath or shower, we would take time for conversation and sharing with all of them.

Today the same story is being repeated at the doors of the Embassy of Venezuela. There are 2 streets, both with sidewalks filled with colored tents, raised mattresses, clothing hanging on the grates of the houses of a neighborhood where the wealthiest families of the city reside. Many men and women sitting, staring vacantly in the midst of the distress of having no response from the Venezuelan government about a flight that will bring them back to their homeland. The majority of those that have settled there are young families, pregnant women — some almost ready to give birth. At this point the youngest is three months old, and the eldest person is 90. The children run in and out of the tents. The adults maintain order; others make use of their time styling one another’s hair. As we share with them, the topic of the experience of God emerges naturally and spontaneously. Easily they share their belief in a God who is with them, and the trust that the response from the authorities will, in the end, be good. And yes, it is very easy to recognize the passage of God in their lives, and how He accompanies and sustains their hope in a God who transcends borders and is the author of their current history of salvation. Some days it was very easy to go there and spend some time conversing with them. One day with a group of women we brought and shared lunch with the children and youth. Nevertheless, now in the midst of the total quarantine, we are beginning to run out of creative ways to obtain the permission to leave the house. These are very regulated; even so, there is always someone in the group who has a safe passage which permits us to get through some of the sanitary barriers in order to reach the place.

It is wonderful how the people are moved and are aware of so much need that is being revealed in the midst of this pandemic. One of our lay communities involving many, and among these ACI Family communities, has inaugurated the campaign “From the hand of Raphaela Mary, heat a home.” The response has been so generous that now we will be able to bring fuel canisters that will allow them to light stoves to ward off the bitter cold of this winter that has recently begun…