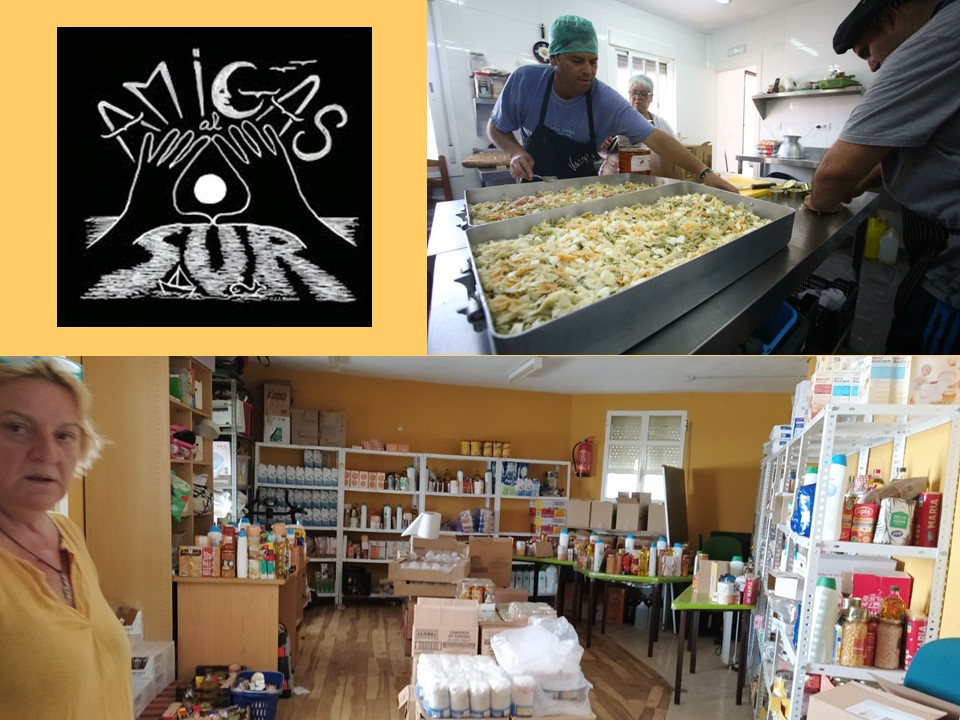 25 Aug FRIENDS TO THE SOUTH/SPAIN

Posted at 07:54h in Migration with others by ACI

COVID 19 has yanked us out of our “lethargy” and has brought us to the peripheral neighborhoods of many cities to get acquainted up close with vulnerability.

In the month of July, Lola Vegas aci invited me to participate in the #servirjuntosverano2020 project from the 20th to the 31st, accompanying four first-year students from our high school (Miriam, Lourdes, Alejandra and Blanca), in order to respond to the social needs that had been increasing during the state of alarm.

Our collaboration was with the AMIGAS al SUR (Friends to the South) Association in Cerro del Moro, one of the most vulnerable neighborhoods in Cadiz. It was created 15 years ago by Pepa Fernández, as she is commonly known, with a shelter in the neighborhood of Viña, the cradle of the Carnaval, one of the most popular festivals in Cadiz.

The Association currently has a group of people who work altruistically in order to improve the quality of life of the people who live there, among them the Association’s president and her daughter.

The first day that we arrived to the places where they work, I was struck by “the profile” of the people who were going in and out of the center, so many hues, and how they were being attended. This gave me a lot to think about, and I said to myself: “of these is the Kingdom of Heaven.” Doubtless, sharing with people who are “different” is very enriching, but at the same time it makes you think.

Our collaboration consisted of picking out food, checking the expiration dates of the same, and preparing bags which would later be distributed to the families. (The Tupperware containers with prepared food that used to be handed out were suspended in the month of March when the lockdown began due to the pandemic.)

The days were very hot, and to this was added the use of masks, that I think will be “our mascot” during a very long year.  The first day I tried to open a window, but on realizing how it was sealed up for “security purposes,” I gave up. (The Association is located in one of the most marginal neighborhoods of Cadiz.)

Throughout the day, once in a while, there was a pause “in the task” and I commented to the girls: “Look how the simple people help the poor, and they responded with admiration and surprise: “We didn’t even know that this neighborhood exists in our city.” This experience has done a lot of good to these girls. It has helped them to broaden their horizons because they have gotten to know the real situation of vulnerability that there is inside the city where they live. They have realized, “that not everything is rosy, that many people don’t have even half of what they have, and that many others have nothing.”

We often go “forth,” and we do not realize what we have “within.”  COVID has made us go to the most remote places in many cities, to get in touch “on site” with how many situations of poverty there are in our own surroundings which we never knew existed.

How many collaborations there have been in Cadiz and in many other places because of the pandemic! This has necessarily moved us to reflect, to realize that one has to go to the peripheries, as Pope Francis says, because it’s there that they need us, and there we can find the true Face of Christ.

During these days, I have not taken my eyes off Pepa (the president”, the wife of an ordinary laborer, welcoming, unassuming, approachable, attractive, confident and dedicated, from morning to night, to all those who need help, no matter who they are. At times she reminded me of Father Ángel, the founder and president of the NGO Mensajero de la Paz.

I have learned that the richness of diversity teaches you to “get to know the world” without the need of leaving where you live.