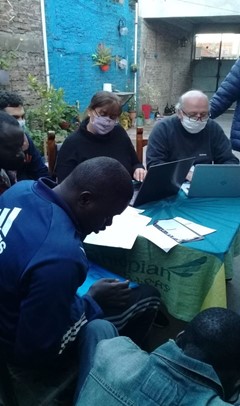 Posted at 12:14h in Migration news by ACI

We visited the community of senegalese immigrants in Francisco Solano, in the department of Quilmes, in order to address various existing doubts concerning enrollment in afip, compliance with the general system of monotax and the regularization of fiscal obligations.

And so, this event offered us something else, and, even though it would have seemed imcredible a priori, it was sorely needed by those who received it. It was about using our knowledge, our skills and experienced acquired thanks to our professional training, but now not as a means of providing for our families, but putting it at the service of  needy third parties, thus giving a social dimension to our normal activity.

Even if the results of this first encounter have not been what we would have hoped, it did serve to emphasize the reality of the situation of each one of them, and has permited us to create an orderly and effective course of action to solve the problems presented.

Once night had fallen, and we had returned home by car, we were unable to put this group of immigrants out of our minds, with all their needss. And we transferred their situation to that of our grandparents and we imagined that they too would have lived through similar problems, on arrival in the new world from Italy; the wonderful work done by Father  Juan in villa itati, the accompaniment given by Maria Marta and Constanza. So all other reasons were definitively erased from our hearts, as we understood that we just had to be to part of the team.

As we would say in accounting terms, we had planned on giving but we ended up receiving the capital of a spectacular experience. A profit that is tax free.