A Conversation with the God of the Poor/ARGENTINE 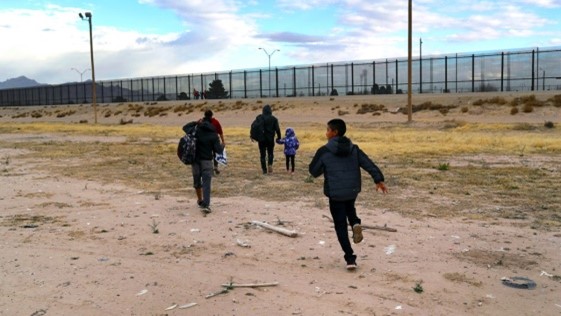 22 Sep A Conversation with the God of the Poor/ARGENTINE

Posted at 14:05h in Migration ABC by ACI

“So Joseph set out from the town of Nazareth in Galilee for Judaea, to David’s town called Bethlehem, since he was of David’s House and line, in order to be registered together with Mary, his betrothed, who was with child. Now it happened that, while they were there, the time came for her to have her child, and she gave birth to a son, her first-born. She wrapped him in swaddling clothes and laid him in a manger because there was no room for them in the living-space.”

The Word became a man in the Mary’s womb,

And in Joseph’s workshop he became a class”.

You became a man and you became a class. Your free decision was to incarnate yourself,  for your whole life, as a poor man among the poor, set totally free from all security.   Mary and Joseph had nowhere to give birth to the new life that was approaching the entrance of the world, an innocent and vulnerable life which was waiting to be welcomed by humanity. But it was rejected more than once and, instead, was accepted in a stable.

Your mum and dad, Mary and Joseph, kept on walking without stopping, asking for shelter in every house, and they were destined to come to a halt in the middle of a stable. You were born empty of everything, and you shared the lot of those who have nothing.

You make yourself the brother of so many mothers who give birth while they are walking in the middle of a human caravan, that finds itself forced to emigrate far away from its roots, because they do not have anything  to eat or they flee from their homes because of persecution.

They travel along the Banks of the  Río Bravo, longing to arrive in the land of hope, yearning to make their dream of a better, more dignified future for their lives, their families and friends,  come true

You make yourself just one more in the midst of so very many wandering pilgrims  who sweat the wound of being abandoned and despised. The road is the only refuge where they feel they can stay far  away from the ill-treatment that they suffer from the people that are supposed to act as those taking care of them.  And there they are, longing at the bottom of their hearts and crying out to be looked at and treated with kindness.

With your incarnate life, you are weaving in our inner selves invisible threads of hope and love. And so, little by little, you are building your nest in our hearts, even though they are poor, so very poor. You have chosen to live and stay there, in an almost imperceptible way, but you are there, because you are always there.

In the web that you are weaving you have managed to trap the pain of a mother and a father who do not have with means to get to the end of the month and to pay for the room in which they live with their children. You devour the grief of a day’s work badly paid and the daily life that is such an uphill struggle.

In it, you capture the  loneliness of the person who has nothing apart from the small backpack they carry, weighed down with suffering. In this weaving you chew and swallow the humiliations of those men and women who live deprived of their freedom. and you make them disappear. You are the only one who can give them back again the  will to live one more day. They hang from the thread of your love,  in an emptiness that opens them to fill themselves with You.

Time and again, you are nesting hope in humanity’s dreams in a place called Bethlehem, on the border called El Paso and in a Soup Kitchen called El Peregrino.(The Pilgrim)