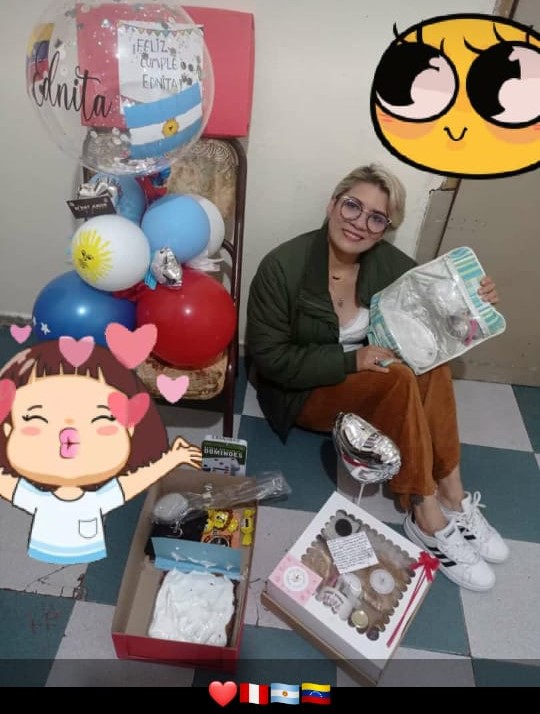 Posted at 14:26h in Migration news, Migration with others by ACI

Some time ago, it was suggested that the university missionary group which I accompany,   should put together a birthday gift box for Ednita, a Venezuelan doctor, who had arrived in our country very recently with her family. We did not know her, we had no idea how old she was, what she liked, what her hobbies were, or any of those simple things to keep in mind when preparing for a birthday, but we did know about her story, travelling with all of her family, trying to reach our country when all the borders were still closed. Journeying from Venezuela to Peru and from there to Argentina.  Taking a very difficult  road, beset with challenges.

After sharing her story with some young people from the missionary group, we all tried to offer her “a small gesture of welcome”, to celebrate her life even though we did not know her very well. I did not think that we would be able to organise ourselves so well, in such a short time, to prepare anything so lovely. In a matter of a few hours each one knew exactly what they had to bring or prepare to celebrate her birthday. I can honestly say that as I was preparing the gift box or making her cake, I had absolutely no idea just what this was going to mean for Ednita and her son and for me too.

They came to fetch the gift box full of presents in the afternoon and a few hours later I received their photos and an audio recording to express their gratitude. It was then that I understood what  it meant to live in a community in which each one contributed the best they had but, above all,  I realized that life is much more beautiful when we share that beauty with someone else. Ednita’s smile made me think about how important a small gesture can be for another person.