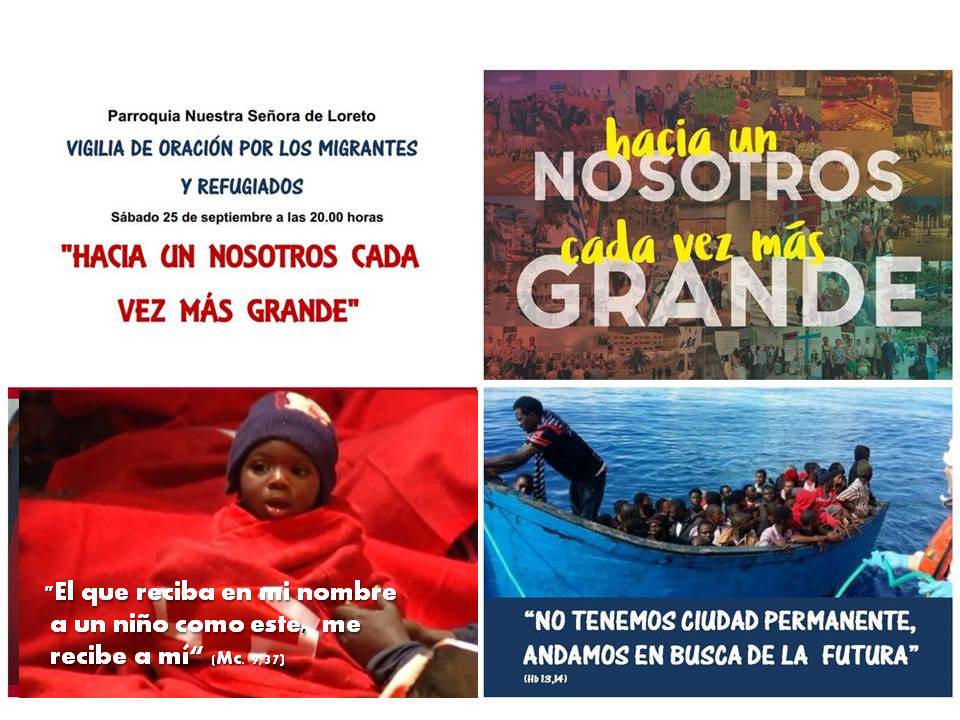 Posted at 10:03h in Migration news by ACI

The Prayer Vigil for Migrants and Refugees was preceded by a minute’s silence and a short prayer for our brothers and sisters on the island of La Palma who are suffering so much because of the eruption of the volcano “Cumbre Vieja”.

PRAYER VIGIL FOR MIGRANTS AND REFUGEES

TOWARDS AN EVER WIDER “WE”.

This year I did not want to make a Power Point presentation about Migrants because I think that we have become too accustomed to looking at images on social media and I would go so far as to say that, now, it has hardly, if any, effect on  us. (“It has nothing to do with us, it does not matter to us, it does not concern us! ) Pope Francis.

“God created us in his image and likeness in order to  form a “we” destined to become ever more NUMEROUS.” By this I mean : that all those who arrive at our borders must be welcomed and treated as people and not as a PACKAGE. The Pope sums it up very well in four verbs: WELCOME, PROTECT, PROMOTE AND INTEGRATE.

WE are called to COMMIT OURSELVES to the most vulnerable and to denounce everything that is unjust in God’s eyes. “Give freely, what you have feely received”. (Mt. 10, 7-8)

Let us never forget that we need each other and that we complement each other. “No one can live alone or be saved alone.” “An encounter with diversity gives us the opportunity to grow as Church  and to enrich ourselves mutually”.

Migrants need us and we need them. They do the most precarious jobs in our country. (Carers of dependent people, agriculture, construction,  domestic staff …) In summary: they take on the work that we do not want to do.

Why do the leaders in Europe put so many obstacles in their way, when half of the West lives off the raw materials from Africa?  Social media speaks to us over and over again about the migrants who arrive in small boats and, in a certain sense, I believe that this is meant to frighten us or to make us believe that they are invading us, but they say very little about how many are lost on the way. So far this year I think that we talking about more than 2000 deaths.

Unfortunately, the only means that politicians are using is that of reinforcing and hardening borders, but the only result that will achieve is to cause more deaths, because  they come and will continue to come.  What a pity that they lack the CAPACITY and the HEART to understand that this about people who are knocking desperately on our doors.

I have spent years working with migrants and I just cannot get used to seeing so much pain…and even less the strength that xenophobia is gaining in the far-right parties.

I am convinced that if the West were to stop taking advantage of raw materials from Africa, in exchange for the shameful tiny tariffs and agreements, not a single African would come.