ASSEMBLY:Religious in Europe Networking Against Trafficking and Exploitation 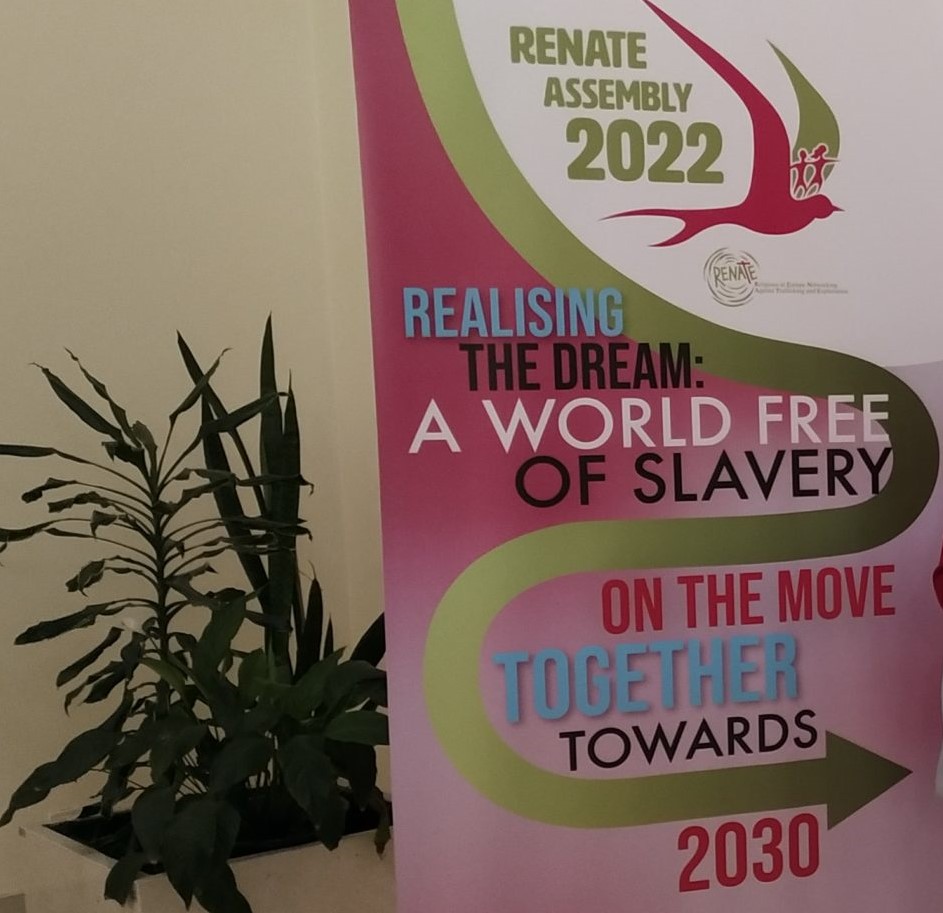 28 Nov ASSEMBLY:Religious in Europe Networking Against Trafficking and Exploitation

From the 13 th to the 19 th of November 105 people from 31 countries met in Fatima for the General
Assembly of RENATE (Religious in Europe Networking Against Trafficking and Exploitation) in order
to deal with the issue of human trafficking.
During that week we listened to presentations, we shared experiences of our work and reflected on
the last six years of the work of RENATE.
The theme of the Assembly was:

“Realizing the dream: a world free of slavery:

on the move together towards 2030”

A dream perhaps somewhat ambitious, but not impossible to achieve. It may be that we feel – and in
fact we are — small, but real change is brought about through the everyday “hidden” and dedicated
lives of each one. In fact, I think that the important thing is to keep taking small steps toward the
goal with hope and to join together to network.

Each day began with a time of prayer that made us aware of why and for whom we were there, and
that set the tone for the day.

The first day we had a panel about the trafficking situation in Portugal, which alerted us to the fact
that human trafficking is an ongoing phenomenon that is constantly evolving and is, therefore, very
difficult to combat. The victims fall prey to traffickers and become invisible. Therefore, it is
important to be alert in order to identify the signs that indicate trafficking situations that often go
unnoticed.
As Pope Francis said, “Human trafficking is an open wound on the body of contemporary society.”
The governments of each country have the primary responsibility or confronting this wound, always
counting upon cooperation from civil society.
In Portugal there is, above all, trafficking for the purpose of labor exploitation in regions such as
Alentejo. The majority of the victims are men who come from Romania, from the Portuguese-
speaking countries of Africa, from Pakistan, Timor, Brazil and Venezuela. Recently many women and
children have also been arriving.
In the afternoon we listened to Professor Anna Roper Rowlands, from the University of Durham in
England, who gave a theological reflection on trafficking, focusing on the theme of human dignity
totally violated through human trafficking.
After each speech we met in groups in order to share about what we had heard.

The second day we listened to Helena Maleno who spoke to us of the complex situation in Spain, the
point from which many migrants try to enter Europe, and where it seems that the policies of
migration control are aligning themselves with the trafficking networks…
Each day ended with a brief theological reflection that helped us to summarize the day.
The third day brought to our attention the economic question connected to trafficking. Our
attention is normally focused on the victims. We assume that the cause of trafficking is poverty and

vulnerability. However, in fact, trafficking has to do with money. People are exploited because there
is someone exploiting them. The real cause of trafficking is economic. Behind trafficking of drugs and
arms, it is the third most profitable international crime industry. The number of victims is more than
two million people a year.
We are speaking of a very lucrative low-risk business. The complexity of this crime makes it difficult
to achieve effective results at the level of intervention as well as that of protection of the victims.
After some days of intensive work, we paused for a day in Lisbon. We visited some institutions that
work directly on the issue of migration and trafficking – JRS, CAOMIO and NINHO. Afterwards we
had some free time to walk around and get to know Lisbon. The day ended in the San Jose school of
the Dominican Sisters of St. Catherine of Siena, where they welcomed us with chestnuts, Oporto
wine and “Pasteis de nata” (Portuguese custard tarts). Following this we had a cultural night with
fados (traditional Portuguese songs) and other presentations prepared by some of the students.
On the final day, trying to form conclusions from everything we had heard and worked on, we asked
ourselves what steps we should take in regard to 2030.
We emphasized the four P’s: Prevention. Prosecution, Protection and Partnerships.

The following emerged, then, as concrete priorities for RENATE:

I end with a call to each of us, so that we may not overlook this matter; that we may all feel
responsible, and that from our own reality, we may commit ourselves to this cause by getting
informed, raising awareness, creating networks, etc.