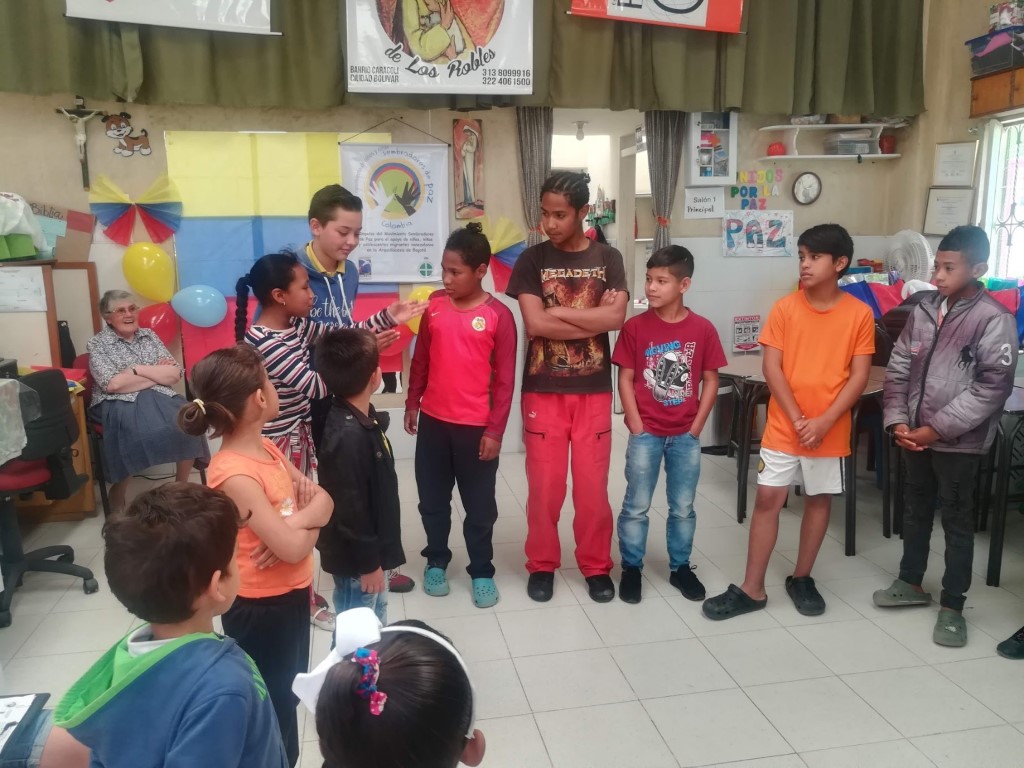 Posted at 11:14h in Migration news by ACI

FICONPAZ (Foundation Institute for Building Peace) is a children’s movement SEMBRADORES DE PAZ (SOWERS OF PEACE) of the Archdiocese of Bogotá. In Caracolí it was begun with adolescents who received Confirmation in November, 2019, and a girl who made her First Communion. Other adolescents have joined the Foundation. They are trained, with an archdiocesan teacher, to encourage groups of children to become SOWERS OF PEACE. Since in the Foundation the INFANCIA MISIONERA (HOLY CHILDHOOD ASSOCIATION) already existed, we felt that it was advisable to join the two groups, structuring them so that the “SOWERS OF PEACE” would be the missionary apostolate of the children of the Infancia Misionera. The confirmees become the Adolescent Missionary group, and would guide the groups of Trigo Verde (Green Wheat) and Trigo Maduro (Ripe Wheat) as sowers of peace.

At this time they are concentrating on Venezuelan migrant children and displaced Colombian children. The internal displacement is growing  rapidly, and Caracolí is one of the places where the people are arriving.

Our groups have already attended two Archdiocesan events. They participated actively in a visit to Bogotá by one of the Auxiliary bishops of New York. They also attended the first archdiocesan meeting of the Sowers of Peace.

Caracolí, a neighborhood on the border, where there is only exclusion, arid mountains sowed with “attempts” at dwellings, is inhabited more and more by people displaced by our internal violence, as well as by Venezuelan immigrants. Coming to our Foundation are the children, many of them sent from Venezuela with some relative or friends, but who are alone here. Networking with the Archdiocese of Bogotá, a group of adolescents recently confirmed in our house, (Ficonpaz) have committed themselves to follow Jesus, taking care of the “concerns of His Heart.”

The group that is being prepared to accompany groups of children who are going to “sow peace”  are attending training workshops and have attended local and archdiocesan meetings. What is most beautiful, they have “replicated” what they are learning with a group of 20 Venezuelan children. Before beginning the school year, they gathered them together, and in an afternoon of “recreation and training” which they themselves organize, they gave them school supplies provided by the FICONPAZ movement. They invited them to become part of the IAM (Childhood and Adolescent Missionaries), that has been organized so that “sowing peace” is their missionary apostolate.

It is lovely to see how our Foundation is becoming a zone “without geographical boundaries.” At the same time, it is painful to observe that what brings them together is the very situation of “urgent migration”: being uprooted from familiar surroundings, from their rural culture, from their own identity, in order to look for a habitable space. Our displaced children share with the group of immigrants who, also uprooted from their homeland, their culture, their land, come in search of a roof over their heads, something to eat, health, education, etc.

Our adolescents and children from displaced families accepted the call and have begun to work with the Venezuelan children. Through the children, we have discovered the families, with whom, also networking with the Archdiocese, through FAMIC, we can serve “as a family”, keeping in mind the many dimensions of the person: psychological, social, health, education, in the pursuit of decent housing, in search of employment, and of legalization of their residence in Colombia.

We feel that it is a gift from God to have the opportunity to draw near to this painful reality of forced migration due to violence or the urgent need to survive. We are grateful to the Lord, and we desire to become an effective response to this reality which goes beyond us.