MISSION ON THE CHILEAN BORDER 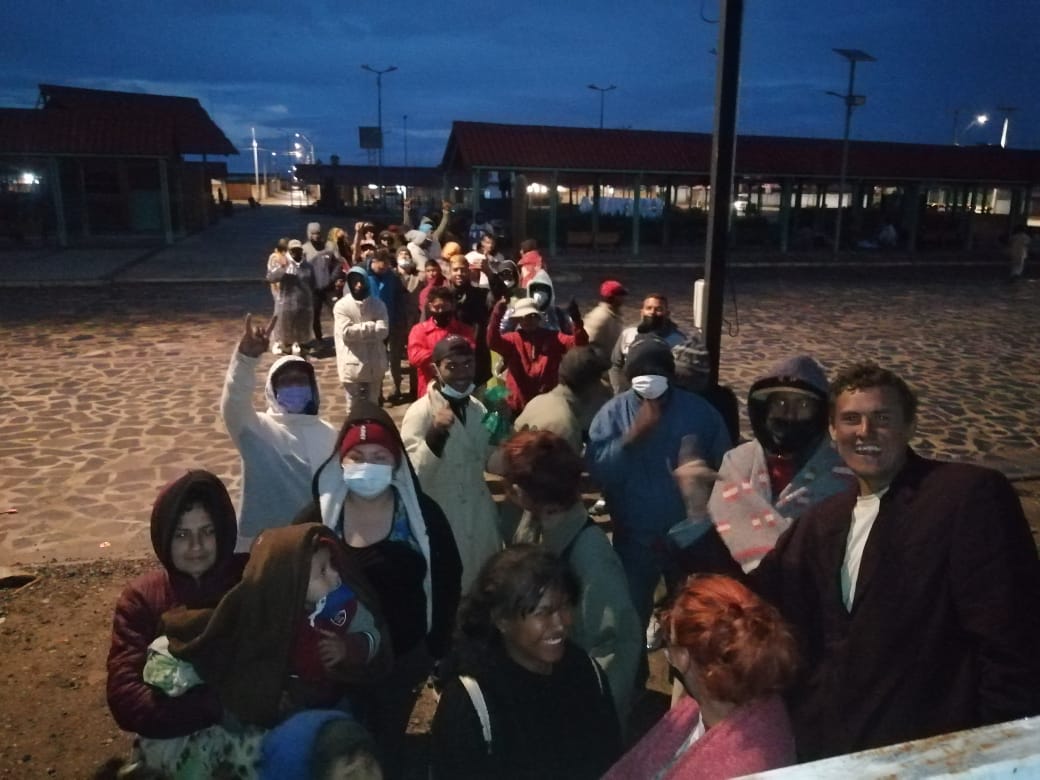 23 Feb MISSION ON THE CHILEAN BORDER

Posted at 14:30h in Migration news by ACI

On January 19th, at around 11.00 am., two Franciscan Missionaries of Mary, who live in a town in the north of Chile called Iquique, called by to collect us to begin a trip of some 237 km. in the direction of a small village in the Highlands, called Colchane, situated at 3,702 metres above sea level.

As soon as we left the town, we began to see how the sun, the clouds and the soil of the hills play at painting different shades of brown and gray. The desert is beautiful and silent; it is a silent witness to dreams of a better future, of reuniting the family and of living a peaceful life. It is also a silent witness to uncertainty, hunger, the cold, the impotence and pain that cause so many people for many different reasons to decide to cross the long border in the north of Chile (Colchane), which meets the Bolivian border (Pisiga). The pass is closed so everyone who crosses the border does so illegally, it is an unauthorised crossing. Every day more than 100 people, men, women and children, cross the very long border, at any time of the day, if they have managed to avoid the police and health institutions of Chile, and we have no idea who the people are who have entered our country.

The national Conference of Religious, Conferre, moved by this migration crisis, joined the work already being carried out by the regional Conferre, and the Diocese of Iquique. Since October of last year great strides forward have been made to help our brothers and sisters who come mostly from Venezuela, there is also a large group of Colombians and very few Bolivians and Peruvians. Since then, groups of religious men and women have been formed from different Congregations and places in Chile to offer support where needed. And so, Claudia Salazar (an aci postulant), Dayse Benavides, (a lay woman ) and I, set out on this journey,our destination being the village of Colchane.

We will not allow them to lose HOPE

The three of us were there, in an open wound, in a physical and existential border which is demonstrating to our country that our immigration laws are deficient because we have not been able, all these years, to improve the situation either for our brothers and sisters who are migrants or for our own Chileans who live in tiny villages and towns in the north.

The government has a site where they can hold around 200 people in quarantine, in big tents that have been set up at the side of the customs complex. They receive two meals each day in the complex and the day we arrived, a medical centre was being set up inside a tent. The rains and hail storms of the so called Highlands had overturned two tents so much so that their capacity is diminished to around 180 persons. Outside this unit, around 100 people are left out in the open every day, hoping to be called for the Antigen test so they can be admitted to the government site.

Hunger and the cold, sickness and insecurity, together with the lack of protectionthat many of them experience, is what forces them to decide to travel to Iquique on foot, which entails 3 or 4 days in the desert. If they are lucky a truck will give them a lift, others pay very high prices for illegal transportation which takes them to Iquique, sometimes they are tricked and left in any old village.

We were there, on this border, with the responsibility of looking after a second site, adapted this time as a refuge by a local Church. It has a capacity for 23 mattresses, each one covered with a thick sleeping bag and a blanket. On the first day when we opened the site, we aware of three facts: 1) it was a night refuge, open from 10;00pm and closed at 8:00am the following day. 2) it was a place for women and children and 3) we had to be careful about our behaviour because we could not allow them to lose hope

And so we were witnesses for 6 nights of the multiplication of the loaves, for where we began cooking for 18 people, women and children, in the end about 150 people ate, including men, who were waiting behind the fence, knowing full well what our priority group was.

How can we repair a broken and wounded humanity?

Among the many answers that surfaced in my heart, I choose  : “pass through this world doing good”, this can be done even in difficult moments,  to which Raphaela Mary and Pilar are our beloved reference point.

“Pass through this world doing good,” accompanying our brothers and sisters, sprang from our closeness and friendship with our Lord.

From close at hand, implicating ourselves, making risky decisions, not naively; trying to trust that, there was some truth behind all the stories that they told us asking for help. This requires a great deal of dialogue among ourselves, dialogue in the key of discernment.

From close at hand, implicating ourselves, making risky decisions, not naively; trying to trust that, there was some truth behind all the stories that they told us asking for help. This requires a great deal of dialogue among ourselves, dialogue in the key of discernment.

From within, being profoundly who we are, women  who act tenderly joyfully with patience and generosity. From the delicacy of serving a plate of well cooked food, coffee and hot chocolate, to handing out cleaning materials, warm clothing, and food for the journey. These ways of acting and these gestures repair humanity and return hope. As the days went by we were witnesses of generous acts on their part, like the woman who decided to sleep outside with her children, on the coldest day, so that a family with small  children could get into the refuge.  We were witnesses that trust and friendship, resulted in our stretching out our hands to help more people. They themselves began to share the help they had received with others.

From below, aware that we are incapable of living this experience of humantiarian aid alone, we spoke with different government agencies (Health Centres, Chilean Police) and non-governmental agencies (Christs’ Home) unicef, OIM,  Acnur and M Josef’s Good Shepherd Foundation and with them we formed networks , sharing names and concerns, and so, in this way, together we were finding help for more people.

Dayse, Claudia and I, are grateful to God for those days during which we were able to share with so many people in Colchane and in Iquique. Thank you Lord, for granting us the grace to unite ourselves with you in the mission to repair hope and joy, because together with others, we were a place of rest and renewal for so many travellers.